Back in March I did a sax n' drums duo recording session with Mark Holub. We did a one-day session at Shiftworks in North London - the same studio that I recorded Koi Bombs, and with the same engineer, Alex Bonney.

Mark was one of the first people I played improvised music with, and we played duo sets back in 2005 in places like the Red Rose Club, and the Bonnington Centre (both gone now sadly). Since then our playing together has mainly been in larger groups, but I always wanted to record as a duo. When we did the Koi Bombs session we recorded a few duos, which were great, but didn't fit with the rest of the stuff. This gave me the excuse I needed to finally book in a duo session to record some more.

We went into the studio with no pre-concieved ideas, and came out with about 15 short improvisations. For this session I took all my horns with me, alto, tenor, and bari. The bari is quite new, and the alto doesn't get played out very often, so it was exciting for me to experiment with these horns and see what I could get out of them.


We've justed finished mixing the tracks, and I've been listening hard and enjoying them. There's a real range of stuff - some very percussive, some melodic, some noise. It's going to be hard to decide what makes the final cut. 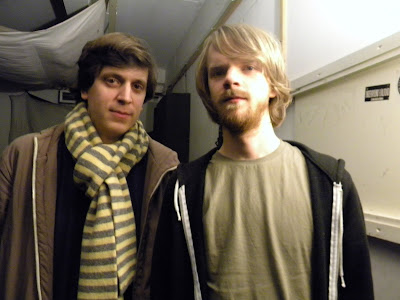