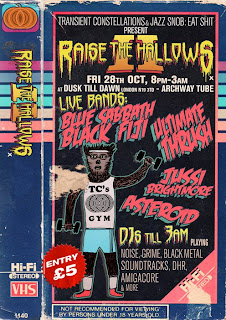 Posted by Colin Webster at 08:38 No comments:

I'm working on some close-miked solo improvisations at the moment. There's still some technical issues to address, but here's a taster of a work in progess:

solo 1 by colinwebster
Posted by Colin Webster at 02:35 No comments:

Lots going on in the world of The Spasm Band right now. The new album - Rubber Orchestras - has just been released in France a couple of weeks ago on CD, vinyl, and download. Reviews and reactions from DJs has been excellent, and the album has been in the top 10 of the soul/R&B album charts on iTunes. We've had a few gigs as well, the album launch was at New Morning in Paris - legendary venue that we've played a few times now. We also had a trip to Marseille, one of my favourite cities to play in, to play at the Marsatac Festival.

The album is due out in the UK and the rest of Europe on Oct 12th. We're having a UK album launch at Empowering Church in Hackney on Nov 11th.

During our summer tour in Western France we shot this video for 'She Is The Sea', on a particularly wet and windy day in St Nazaire:

Posted by Colin Webster at 07:01 No comments:

Back in August I participated in a 12-piece group improvisation session at a warehouse in North London. The session was curated by sound artist/improvisor Graham Dunning, and included musicians from several different improvising disciplines. The resulting recordings have been released as a free download on the Open Sound Group website:

http://www.archive.org/details/OpenSoundGroup-WarehouseOne
Posted by Colin Webster at 03:59 No comments: