The new Spasm Band album is finally finished. I got a copy of the final master from Anthony a few days ago, and I'm really pleased with how it's turned out. We had spent almost the whole of last year jamming together and writing the new tunes, and this February we entered the studio.


We recorded the album in Dalston, East London at the studio of our producer Malcolm Catto. This was the first time that we had worked with a producer in this way, having creative input into the overall sound of the record. It was also the first time we had multi-tracked ourselves. The previous two albums were done live, largely improvised, and all done in a matter of days. This time we spent a week on the rhythm section, jamming things and making adjustments to the compositions, and then about another three weeks on overdubs. The character of the new music is much less improvised than before, with an emphasis on composition, structure, and arrangement. Whereas before the saxophone lines would interweave freely through the track, this time it held down sections. And the brass sections were fat! I wrote and arranged brass section parts for most of the tunes, and was gifted a dream brass section to work with. Robin Hopcraft played trumpet. Robin is an amazing afrobeat trumpeter, and plays with his band Soothsayers, and also worked on the recent Fela musical. On bari sax and bass clarinet I had my good friend Shabaka Hutchings, who has guested and depped with The Spasm Band before, and was on ferocious form for this session. Somehow we got all the sections recorded in one day, and they sound amazing, I'm so pleased with them. I also multi-tracked myself on a few sections playing tenor and bari.


The new record should be out in June sometime, with a possible single release beforehand. Can't wait until it's out!


We've got a live show coming up soon as well on good friday at Passing Clouds in Dalston, where I expect we'll be showcasing a lot of this new album live: 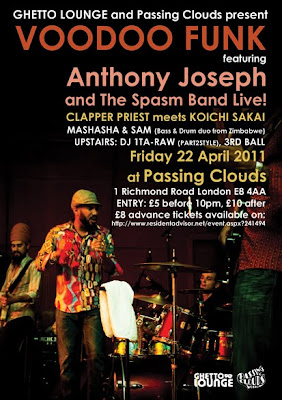