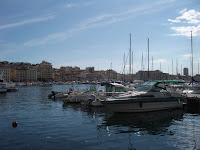 This weekend the Spasm Band was in France for shows in Agen, and Marseille. Agen was new to us. A very cool little town, where everyone wants to shake your hand. The venue - Le Florida - was great too, a 1920's music hall than now also acted as a community centre. The vibe was great, with lots of kids hanging around in soundcheck, and a few young people getting experience with the sound crew which is a spirit I sometimes find lacking in UK venues..

The next day we took an epic 5 hour train ride to Marseille. The Spasm Band unplugged their ipods and closed their books, and dicussions flowed on revolution, politics, religion, spirituality, rock n' roll.. and on and on..
The gig in Marseille was a return to the Bol De Funk festival that we had played 2 years ago on the first Spasm Band tour. We were really looking forward to the gig as Marseille crowds are insane. They didn't disappoint us either, with a sold-out crowd waiting with anticipation. The reaction we got was one of the best we've ever had.. almost Beatles-esque! The gig was incredible, with plenty of rock n' roll antics, and a full-on stage invasion at the end.
Posted by Colin Webster at 10:08