After a couple of months of relative peace, things have suddenly picked up pace this month! Only a few gigs, but things have been hectic behind the scenes.
The month kicked off with a Wart Biter show at Jamboree, supporting Charles Hayward's Trio. The night was a great success, with an excellent audience in the cosy surroundings of Jamboree. The Wart Biter set harnessed elements of improv, electro, noise.. etc.. and crammed them into a breathless 25 minute set. I didn't manage to get a good recording of the set this time, however the band has been in the studio recording some improvisations that I'm hoping to mix, edit, and unleash on the world soon.
I've also been busy in the studio with Chik Budo, preparing new material. Some of the new material is starting to see the light of day which is excellent. We've also recently aquired a new keyboardist - Curtis Stansfield, who not only possesses the pre-requisite big-hair and amazing synth skills, but also a keytar! Writing and rehearsals still dominate the Budo schedule with a few gigs to look forward to in the near future as well.
The Spasm Band has also had a hectic month behind the scenes following the departure of the percussion section, and the consequent hiring of a new drummer and percussionist. The new line-up played our first show this weekend in Nice. With minimal rehearsals, and some kit parts still to be finalised tension was high before the gig - but The (new look) Spasm Band was successful.
This weekend I had an all day recording session at the excellent Shiftworks recording studio in North London. This was the first recording session of my trio with Mark Holub and Toby McLaren. We recorded a series of trio improvisations with tenor sax, drums, Fender Rhodes, and Juno synth, as well as some duos. It was possibly one of the hardest recording sessions I've ever done, and was truly exhausting. I'm waiting to get back some of the rough mixes and looking forward to hearing the results. 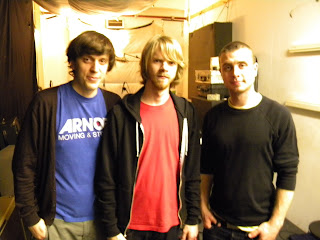