The Spasm Band have just finished the bulk of our touring for the year. June, July and the first week of August was very intense with the band criss-crossing Europe several times, followed by a long-haul flight down to the island of La Reunion in the Indian Ocean. There were so many great shows, but I'll try and pick out some highlights.
In Paris we played the enormous Solidays festival. Probably one of the biggest and loudest crowds we've played to this year. A week later we were in Malmo in Sweden. Much more sedate, but very beautiful. We had a late flight home, and spent the day my the sea. Paul Z slipped on some rocks and cracked his head open, so we spent the rest of the day looking for a doctor.
The following week we had a short tour around France, starting in Bordeaux followed by Vienne then Cognac. The Jazz a Vienne festival was incredible, for both the line-up and the setting. The venue was a 7000 capacity ancient Roman amphitheatre set into the hillside over-looking the valley. We arrived the night before and managed to catch some of Wynton Marsalis's Lincoln Centre Jazz Orchestra. Goes without saying that their musicianship was spectacular. In the hotel lobby I ran into a New York band I love called Kneebody. They were doing a collaboration with electronica producer Daedelus. I managed to catch most of their set as well which was really inspiring - great sounds, textures and insane beats!
The next day we played the close of the festival - the Jazz Mix Night. The artists we shared the stage with were between them some of the most influential artists of the last 50 years. The Sun Ra Arkestra led by Marshall Allen opened the show, later on was Roy Ayers with Don Blackman. We played our set at around 3am, and were joined by steel-pan legend Othello Molineaux and Joseph Bowie on trombone. Following us was Seun Kuti and Egypt 80 (we shared a ride in their tour bus earlier in the day, great energy and they were so warm and friendly to us). Egypt 80 did a collaboration with Archie Shepp. I climbed to the top of the amphitheatre in the chilly darkness and watched their set as the sun rose over the valley - definitely one of the greatest gigs/experiences of my life! 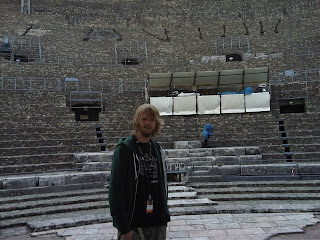 We were backwards and forwards between England and France several times over the next few weeks. Great show in Angers by the river just before the rainstorm, beautiful weather in Vence in the equally beautiful town square. Hot and dusty gig in spectacular Grenoble - if only we had more time there! Esperanzah festival in Belgium was great too, set in an old monastery. We played twice at Bout du Monde festival in Brittany - mad crowds for both shows. Saw TV On The Radio (one of my favourite bands) at Les 3 Elephants festival - was slightly dissapointed by their live show - still love 'em though.

For the final leg of the tour we returned to Paris to play a support slot for George Clinton and Parliament/Funkadelic. They are an incredible band still, with more than 20 members on stage - all instruments and vocal mics on constant rotation, and great energy, which from the look of the hotel lobby at 6am carried on for quite some time.

The next day we headed down to Sete on the south coast. We managed to grab a few hours on the beach before soundcheck. The venue was spectacular. A roman amphitheatre (again), this time looking straight out over the Mediterranean. We were playing a support slot for Femi Kuti. Unfortunately we got a riotous response from the crowd followed by a mass stage invasion, which pissed Femi off so much he banned us from watching his show from the side of the stage! 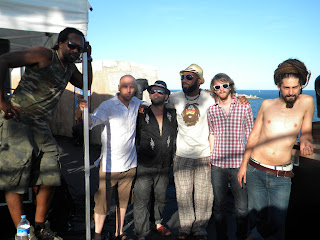 The last trip of the tour was the one we had been looking forward to the whole time - La Reunion. La Reunion is a small island in the Indian Ocean which belongs to France. It's volcanic and rises straight out of the sea, it looks a bit like Jurassic Park. The funny thing is that because its part of France everyone drive Peugeots and eats croissants, and everything looks quite French despite being thousands of miles away.
The first night we were supposed to do a radio show at the festival site, but we got there late and missed it so we drank beer and watched bands, and had amazing barbecued chicken. The next day we swam in the pool, ate wild mountain goat, and in the evening had our set at the festival. This was our last gig of the tour. The shows had been getting better and better, with more interplay, inventions, energy etc.etc. and the show at Safiko was really the culmination of months of playing the set. Plenty of beer and rum followed. 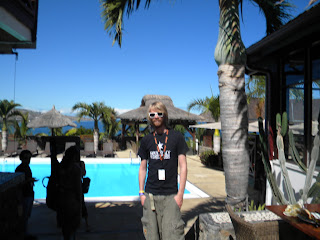 In the morning Antoine drove us to the beach, where the Spasm Band nursed our hangovers in the shallows of the Indian Ocean. More curried goat was followed by a slightly drunken 20 hour trip back to London, and the end of the Bird Head Son tour... for now.
Posted by Colin Webster at 05:00