The Spasm Band has been spending a lot of time on trains, busses and budget airlines over the last few weeks playing shows in France, Belgium, Holland and Germany.

In Paris we supported Common at a big out-door event in Stalingrad. It's a running joke in The Spasm band that Anthony looks like Common, he's been mistaken for him before.. so it was really funny to see the crowd reaction when he walked on stage, and their ensuing confusion!
Common's set was great - very slick as you'd expect. Found myself watching the show standing next to Venus Williams. Was too shy to get a picture though!
A few weeks later we embarked on an insane train tour of France starting in Rouen, then Castres, over to Toulon, finishing up in Nijmegen, Holland. The train journeys were gruelling 8-9 hour affairs, testing patience and buttocks alike. Toulon was a fun show - we always have a good time in the South of France, there's something in the atmosphere down there that connects to the Spasm Band.
The Music Meeting Festival in Nijmegen was also a lot of fun. Loads of stalls selling food from all over the world, and some great bands as well of course. We played on monday afternoon, and were joined on stage by the notorious Joe Bowie. I've played with Joe a few times now, but in Holland something really clicked that brought the punk-funk out of both of us. As if that wasn't enough, I left the stage and got greeted by Seun Kuti who had just arrived for thier set. Also ran into Showboy - Egypt 80's Baritone player - who is a real hero of mine. I've seen Seun and Egypt 80 a couple of times before, and it's always an incredible show. There's so much history and character in their band, that transcends the music. 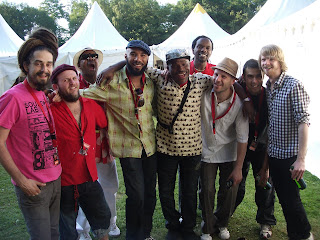 A week later we were on a early flight out of Stansted for a show at Bielefeld in Germany. I played Insomniacs Ball the night before with Chik Budo, and didn't get any sleep at all! The rain fell hard in Germany and the expected 1000 people at this outdoor festival was reduced to a handful of hardy (and quite drunk) souls. You win some, you lose some! Had some nice currywurst thoough..
A week later in Brussels we had a bit more luck, with a packed-out double bill with Bibi Tanga at Ancienne Belgique. The following day was supposed to be a day off in Amsterdam before a show at Paradiso, but a power-cut on the mainline meant we spent all day on packed local trains and busses trying to get across the border. Luckily we had all afternoon the next day to chill-out in Amsterdam, and that's got to be the most chilled capital city in the world! The show at Paradiso was great, and we were once again honoured to have Joe Bowie with us on trombone and some fierce djembe playing. The gig ended with a Sun Ra style procession off the stage and through the crowd - "Fire Brigade Water De Road!!"
Posted by Colin Webster at 07:03